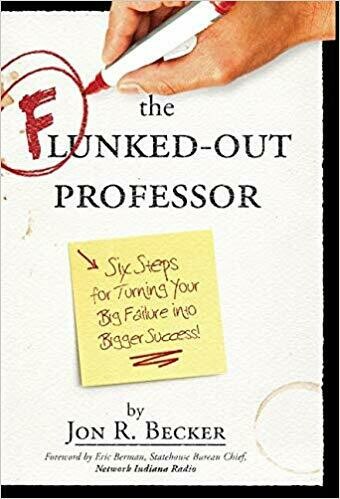 The Flunked-Out Professor: Six Steps to Turn Your Big Failure Into Bigger Success

Jon has been kicked out of college.

He spends his days playing video games and his nights delivering pizzas, with no motivation to develop a sustainable plan for the future. Recognizing this, Jon’s girlfriend decides that she doesn’t want to be stuck with a video game-addicted pizza delivery man for the rest of her life. So, she tells him to get his act together, or she will have to end their relationship. Jon feels like a total failure.

Failure is a common part of life for everyone. But when we fail, most people make the mistake of identifying themselves as the failure instead of recognizing that they have experienced failure.

In The Flunked-Out Professor, readers follow Jon as he makes a series of bad choices which get him kicked out of college and beaten down in life. Eventually, he chooses a new path–one that ultimately leads him back to the same college that kicked him out…as a faculty member!

Jon shares the six steps that led him from the depths of academic failure to the heights of academic success, and how those same six steps can be applied to overcome the failures in your life as well. Jon also shares best practices for achieving college success and life skills for enhancing personal growth and professional development.

The Flunked-Out Professor is a must-read for anyone who is currently experiencing failure and wants to pick themselves up, dust themselves off, and start down the road toward success.

Save this product for later
Display prices in: USD